The R nineT, the first BMW motorcycle tuned for customizing, was introduced at BMW Motorrad's 90th anniversary party in 2014. While this was taking place, the "R nineT Custom Project" took off. Shiro Nakajima (46works) was one of the four custom motorcycle builders selected from all of Japan to take part in this task. He says, "It looks like a Cafe Racer at first, however, it is more oriented toward racing. More like a Clubman Racer." He would bring his R nineT to the tracks himself, take off the safety related parts then race. A custom motorcycle that can only be made from his knowledge and experience. 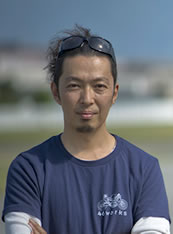 He started Ritmo Sereno, a shop that specializes in customizing European vintage motorcycles in 2001. He is also recognized for spreading customized BMW Cafe Racers around the world. Now he has his own motorcycle workshop in Yatsugatake called 46works, where he offers a full custom motorcycle build service. He has worked with many celebrity motorcycle enthusiasts, taken part in the project for KTM, as well as receiving many awards.
日本語バージョン →